Easy ways to lose your driving licence as a new driver 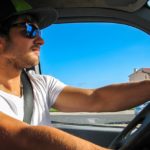 One of the first things that you need to do when starting work, unless you are living in a city or working within walking distance of your job, is to learn to drive so that you can get to work.

Many new drivers don’t realise that although they have been granted their licence, they are on probation for the first two years of their driving lives. This means that if they pick up 6 penalty points their licence is revoked and they are returned to “learner” status.

Although 6 points sounds like a lot, it really isn’t and you may be surprised by just how fast they can clock up, most offences carry a penalty of 3 points, so just two offences and you could be in the position of loosing your licence. The most common driving offences are:

The above 10 offences are just the most common motoring offences, and these are by no means the only ways you can be prosecuted or get penalty points on your licence. If you find that you have fallen foul of the law, you may want to consult a solicitor to advise you on your rights and the best way to proceed whether that’s a simple “plead guilty” or a more complex process.

Most of the time, if you err on the side of caution, and pay attention to your vehicle maintenance and the road conditions surrounding you as you drive, you will be able to get through your driving life without encountering any problems – it can be difficult, particularly for young drivers as peer pressure to have a drink after all “one won’t hurt”, can be very strong but is one pint (which can rapidly turn into to two or three) really worth risking losing your licence for?

Posted in General
About this blog

Over the years we have published many articles based around the questions that we get asked from small businesses relating to marketing, SEO, general business advice and other subjects.  You can find a list of related articles grouped by subject below or can even search for a word or phrase or browse our recent articles.

We hope that you find our articles useful.

The Crafty Kitten, a local craft and gift shop.

Welsh Dragons made from polymer clay.

Are you a UK based firm of Accountants looking for a secure messaging system for you and your clients? Check out accSEND, a system dedicated to solve this problem.